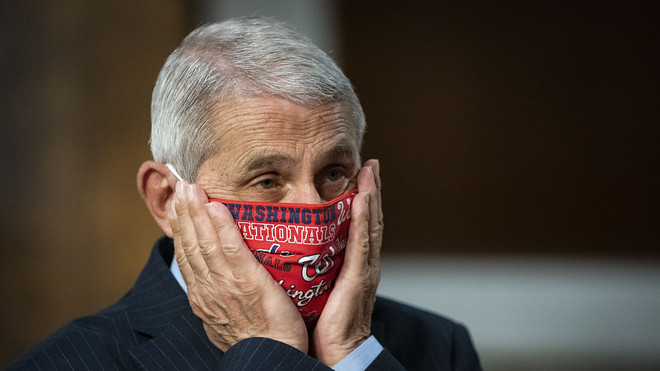 Why the Virus Is Beating America

Why the Virus Is Beating America

When Americans tell the story of NASA’s Apollo 11 mission, it’s often framed as a tale of three great men: Neil Armstrong, the first man on the Moon; Buzz Aldrin, who followed in Armstrong’s literal footsteps; and Michael Collins, who remained in lunar orbit while the others explored the lunar surface. In reality, it took more than 400,000 scientists, engineers, secretaries and other hard-working people at NASA and elsewhere for the mission to succeed.

Now, more than 50 years later, the U.S. is facing a different challenge: the war against COVID-19. But so far, the virus—which has killed more than 166,000 Americans—is winning.

It’s easy to blame American individualism for the country’s pandemic failures—a public-health crisis requires cooperation at every level, from government officials to neighbors who agree to wear masks and stay socially distant. But as my colleague Alex Fitzpatrick points out in his latest story, Americans have shown time and again that, when the stakes are high, Americans are willing to work together on a common cause, whether it was defeating Hitler’s Germany or putting astronauts on the moon.

Instead, Fitzpatrick says there may be a different force now at work: apathy. Even as the pandemic rages, about a quarter of Americans still don’t feel that masks should always be worn (despite evidence that they curb viral spread); hundreds of thousands of people (mostly vacationers) are still traveling by air; and Disney World reopened despite a surge of COVID-19 cases in Florida. These are all signs that at least some Americans simply don’t care that there’s a virus killing hundreds of us every day.

Furthermore, there’s been a failure of leadership at the national level, Fitzpatrick writes. Over the past five months, U.S. President Donald Trump has undercut public health officials by declaring that the virus would “disappear,” pushing states to reopen, and de-emphasizing the importance of face masks. Meanwhile, the government has failed to set up sufficient testing infrastructure, and Trump has blamed expanded testing for rising cases.

But hope is not yet lost. To conquer the virus, the U.S. needs the same thing that put American astronauts on the Moon: a belief that, by working together, Americans can achieve the seemingly impossible.

More than 20.6 million people around the world had been sickened by COVID-19 as of 5 AM eastern time today, and more than 749,000 people have died.

Here is every country with over 250,000 confirmed cases:

Europe is experiencing a new surge in cases—but this time it’s driven by young people and fewer people are dying, according to CNN. People between 20 and 29 years old make up the largest proportion of new cases across the continent (19.5%), according to the European Center for Disease Prevention and Control, and the median age of those testing positive dropped from 54 years old in January to 39 in June and July. Officials are blaming lax social distancing for the new spike.

To control the European surge, countries across the continent are enacting new travel restrictions, the Wall Street Journal reports. Italy announced today that travelers from European countries with rising cases must be tested for the virus, and numerous countries are limiting travel from Spain, where cases have risen sharply.

The Africa Centers for Disease Control and Prevention announced today that an antibody study is being conducted across the continent, according to the Associated Press. Officially, more than a million cases of COVID-19 have been reported across the continent, but some studies have suggested that the true extent of the outbreak is much larger. “How many people are infected and asymptomatic on our continent? We don’t know that,” Africa CDC Director John Nkengasong told reporters.

The Situation in the U.S.

The U.S. recorded nearly 5.2 million coronavirus cases as of 5 AM eastern time today. More than 166,000 people have died. Here’s where daily cases have risen or fallen over the last 14 days, shown in confirmed cases per 100,000 residents:

On August 12, there were more than 55,900 new cases and 1,499 new deaths confirmed in the U.S. Here’s how the country as a whole is currently trending:

New jobless claims in the U.S. last week fell below 1 million for the first time since March, the U.S. Department of Labor revealed today. About 963,000 seasonally adjusted claims were filed during the week ending Aug. 8, a drop of 228,000 from the previous week. The data may be a sign that the job market is improving, but could also be connected to the end of a federal program that provided an extra $600/week for out-of-work Americans.

Amid a developing crisis at the United States Postal Service, U.S. President Donald Trump said yesterday that the agency lacks the funding to facilitate national mail-in voting during this November’s election—but he also won’t approve $25 billion in general emergency funding or $3.5 billion in election-specific USPS funding, the Washington Post reports. Some voting advocates have accused the Trump Administration of purposefully impeding the USPS in an effort to make it more difficult for Americans to vote by mail during the upcoming election rather than visit a polling place in person during a pandemic.

Unions representing New York City teachers and principals want the city to delay reopening classes for in-person education this fall, Gothamist reports. The city is currently planning a hybrid reopening, with some remote learning and some in-person classes. The unions’ demands come as New York public-health officials are scrambling to respond to a new outbreak of more than 200 cases in a Brooklyn neighborhood.

AMC Theaters, the largest movie theater chain in the U.S., is planning to reopen about 100 of its locations on Aug. 20—and moviegoers will get a special deal, with tickets on offer for just $0.15 a pop. AMC, which has kept its theaters closed since March, is promoting the deal with the tagline: “Movies in 2020 at 1920 prices.” But skeptics say the company is incentivizing people to gather indoors for long periods of time, which many health experts say puts people at greater risk of contracting the virus.

All numbers unless otherwise specified are from the Johns Hopkins University Center for Systems Science and Engineering, and are accurate as of August 13, 1 AM eastern time. To see larger, interactive versions of these maps and charts, click here.

WHAT ELSE YOU SHOULD KNOW

The Trump administration ordered 650 million masks as part of a $675 million program to distribute free, reusable masks—enough to give nearly every American two masks each. However, upon closer inspection by STAT, the program seems to have gone awry; 96,000 masks were delivered to drug company Bristol Myers Squibb and 37,500 went to a Florida school with 140 students. Read more here.

Nelson Mandela’s Granddaughter On Global Solidarity During the Pandemic

As the world fights the novel coronavirus, it must not lose sight of the need for social justice, Ndileka Mandela—the granddaughter of Nelson Mandela and the niece of Zindzi Mandela, who died in July after testing positive for COVID-19—writes for TIME. In her essay, Mandela urges Congress to set aside resources for global health funds to fight COVID-19 and other diseases. Read more here

Lockdown in the Himalayas

The small Himalayan kingdom of Bhutan has enacted its first lockdown after a 27-year-old Bhutanese woman tested positive for COVID-19; she had recently been to Kuwait and traveled extensively across Bhutan upon her return. Under the new order, the country’s 750,000 residents must stay at home for five to 21 days. Read more here.

The True U.S. Death Count May Be Higher Than Advertised

The number of people who have died in the U.S. since March is more than 200,000 over the usual mark during the same period, according to an analysis by the New York Times. That’s significantly higher than the official coronavirus death toll so far, suggesting we’re not accurately recording every virus-related death. Read more here.

Thanks for reading. We hope you find the Coronavirus Brief newsletter to be a helpful tool to navigate this very complex situation, and welcome feedback at coronavirus.brief@time.com.

Today’s newsletter was written by Tara Law and edited by Alex Fitzpatrick.