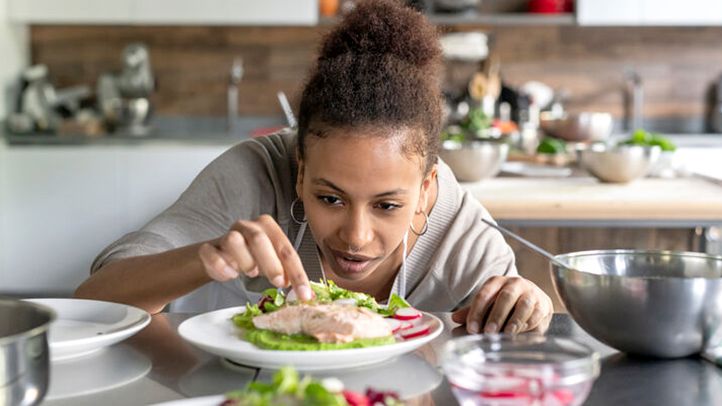 10 Vitamin D–Rich Foods to Add to Your Diet

Fish, mushrooms, and several fortified foods can help you get your fix of the Sunshine Vitamin.

Tuna, swordfish, and salmon are all good sources of vitamin D.

Are you getting enough vitamin D in your diet? This nutrient is important for growing healthy cells, keeping your immune system humming to ward off illness, and aiding in calcium absorption so your bones stay strong. It also helps prevent the bone disease rickets in children, and with calcium, the so-called Sunshine Vitamin can help guard against osteoporosis in older adults, the National Institutes of Health (NIH) notes.

Vitamin D is produced in your body when the sun’s ultraviolet rays hit your skin, and the recommended daily allowance (RDA) of vitamin D is 600 international units (IU), which is 15 micrograms (mcg) for most adults, according to the NIH. For those older than 80, the RDA is 800 IU (20 mcg).

Yet most people don’t get enough vitamin D via sunlight, nor is food a good source of the nutrient, says Lori Zanini, RD, a Los Angeles–based dietitian.

People typically don’t exceed 288 IU per day from diet alone. Even if you drink milk fortified with vitamin D, 8 fluid ounces (oz) has only 100 IU — one-sixth the amount that you need daily. No wonder 41.6 percent of Americans have a vitamin D deficiency, per a study. A vitamin D deficiency means you have 20 nanograms per milliliter or less of the nutrient in your blood. If you are nonwhite, obese, or do not have a college education, you may be at greater risk for being vitamin D deficient. Your healthcare provider can test your blood to find out for sure.

RELATED: Do You Need to Take a Vitamin D Supplement?

To get your fix, you can opt for supplements. Zanini recommends vitamin D3 (cholecalciferol), which is found in animal sources of food and is generally better absorbed in the body, though plant-derived vitamin D2 (ergocalciferol) is used in supplements as well. Yet research is mixed on whether vitamin D supplements offer concrete health benefits. Authors of a study published in January 2019 in The New England Journal of Medicine theorized that there is a reduced cancer risk for African Americans who take vitamin D supplements, as well as a significantly lower death rate in people with cancer who take them. But major studies published recently, including an October 2018 review in The Lancet, have not shown benefits from supplementation, despite prior hype about it.

“Getting vitamin D from food is a priority,” says Zanini. Make sure your diet is rich in the following fare, so you can increase your intake.1

Sockeye Salmon Is a Source of Protein

Not only is salmon a great option if you’re looking for protein to add to your diet but it’s also rich in the Sunshine Vitamin. According to the NIH, 3 oz of cooked sockeye salmon has about 447 IU of vitamin D. “In addition to vitamin D, salmon is a great addition to anyone’s diet, with it also being a good source of healthy protein and omega-3 fatty acids,” says Zanini. According to the NIH, fish offer two critical omega-3s: eicosapentaenoic acid and docosahexaenoic acid, which you must get through food. Omega-3s help keep your immune, pulmonary, endocrine, and cardiovascular systems healthy.

Add sockeye salmon to your dinner rotation with this flavorful Dijon-based recipe. Other cold-water fatty fish, like mackerel and sardines, also have similarly high levels of vitamin D, per the NIH.

RELATED: What Are the Health Benefits of Tilapia?2

Swordfish is another favorite of Zanini’s. Three cooked ounces provide 566 IU per serving, which nearly gets you to your daily recommended intake of vitamin D, according to the NIH. “The American Heart Association [AHA] recommends eating at least two servings of fish per week, and this fish is versatile and tasty,” she adds. The AHA advises children and pregnant women to avoid large fish, such as swordfish, because they have higher levels of mercury contamination than smaller, less long-lived species. Yet the health benefits for older adults in particular outweigh the risks, according to the organization.

Canned Tuna Packs More Than 25 Percent of Your Daily Goal

According to the NIH, 3 oz of canned tuna in water contains 154 IU of vitamin D. The affordable cupboard staple is great for easy lunches like a classic tuna sandwich or tuna salad.

Put a healthy twist on the deli favorite with this artichoke and ripe-olive tuna salad recipe. Or include it on your dinner plate with a delicious comfort food meal like healthy tuna casserole with rigatoni. “Tuna is accessible and affordable, making it a great option for anyone,” says Zanini.

While mushrooms don’t naturally offer a high amount of vitamin D, some are treated with UV light, providing a larger dose of the nutrient as a result. The vitamin D amounts will vary depending on the amount of UV light the mushrooms are exposed to, according to the Agricultural Research Service. A serving has between 124 and 1,022 IU per 100 grams (g).

Growers such as Monterey Mushrooms produce varieties high in vitamin D, but you have to read the labels. Once you have them, add sautéed mushrooms to eggs or fish for a meal even richer in vitamin D. Or make a more substantial mushroom dish, such as veggie-stuffed portobellos.5

In addition to being an excellent source of calcium, 8 fluid ounces (fl oz) of milk has between 115 and 124 IU of vitamin D, the NIH notes. Be sure to check the label of your favorite brand for the exact amount. Fortified plant-based milks, such as soy and almond, can provide similar amounts of vitamin D, as well.

Enjoy a cold 8 oz glass of your preferred fortified milk straight up, blend it into a smoothie, or use it to whip up your choice of coffee drink.

RELATED: 9 Best and Worst Milks for Your Cholesterol Levels6

One cup (8 fl oz) of fortified orange juice can add up to 137 IU of vitamin D to your daily total, though the NIH recommends checking the label for exact numbers because counts can vary. Serve a glass of OJ with breakfast or use it in this mango-strawberry smoothie recipe, a delicious and portable morning meal. Keep in mind that it’s generally healthiest to enjoy whole fruit rather than its juice form, since the former still contains filling fiber, so drink juice in moderation. If you have a health condition for which you need to watch your carbohydrate and sugar intake, such as diabetes, it may be best to get your vitamin D from another source. Work with your healthcare team to figure out how much, if any, OJ is right for your diet.7

Yogurt is a convenient, tasty snack — and when consumed plain or with fresh fruit, it’s healthy, too. This type of dairy is an excellent source of good-for-the-gut probiotics, and reaching for a fortified variety will knock off between 10 and 20 percent of your daily requirement of vitamin D, depending on the brand. Many fortified varieties are flavored (meaning they’re likely to be sugar bombs), so read the nutrition label to find out what you’re getting. The AHA recommends a max of 9 teaspoons (tsp) or 26 g of added sugar for men per day and a max of 6 tsp or 25 g of added sugar for women per day.

Try cooking a meal with plain yogurt for a vitamin D–enhanced entrée: This Middle Eastern–style chopped vegetable salad includes greens, herbs, and grains and also uses a cup of plain yogurt. It is a cooling alternative to a hot dish.

RELATED: Eat These 3 Foods for a Healthy Gut8

Cereal Can Be Fortified With Vitamin D, and Oatmeal Offers Fiber

A packet of unsweetened, fortified oatmeal can add a solid dose of vitamin D to your diet. Ready-to-eat fortified cereal typically gives you 40 IU of vitamin D per serving, per the NIH, but it may provide more if you choose a more heavily fortified cereal, like Raisin Bran, which has 60.2 IU per cup, notes the U.S. Department of Agriculture.

Fortified cereal can be a solid base for a nutrient-rich, high-fiber meal — especially if you add fortified low-fat or fat-free milk to your bowl for an extra 60 IU per half cup. Or you can be more adventurous and make a breakfast cookie that includes both fortified cereal and vitamin D–fortified margarine.9

Egg yolks have historically gotten a bad rap for raising levels of LDL (“bad”) cholesterol, as Harvard Health Publishing notes. But skipping them in favor of egg whites means you’ll miss out on some of the protein and several of the minerals in yolks, such as zinc and selenium, which play a role in boosting your immune system. And you’ll miss out on vitamin D, too. One egg yolk has 41 IU, 10 percent of your daily value, per the NIH. Enjoy them in moderation.

RELATED: 7 Ways to Boost Your Immune System for Cold and Flu Season10

Sardines Give You Calcium, Omega-3s, and Protein

Buying fresh fish can be pricey. If that’s holding you back, give canned sardines a try. They’re more affordable than other forms of fish and are high in protein, heart-healthy omega-3 fatty acids, calcium, and vitamin D. Two sardines from a can offer 46 IU of the vitamin, or 12 percent of your daily value, according to the NIH. The underrated fish works well on top of salads, as well as in pasta sauces and stews.

TheViralshield.com Kia Ora to our Customers!. Our website is open and shipping orders in NZ and Australia via courier Contactless during COVID-19 Dismiss